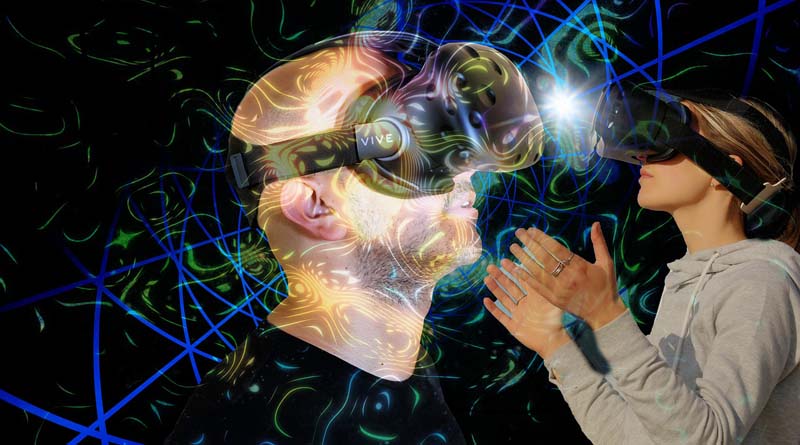 The concept of the metaverse was popularized in science fiction novel Snow Crash by Neal Stephenson to describe a digital world which can be accessed by Virtual Reality. This is a frequently used element in many recent science fiction works, such as the Matrix and Ready Player One movies.

What does metaverse mean?

The metaverse is described as a fully immersive virtual world that looks like the real world but is computer generated. People can move back and forth between the physical and virtual worlds through virtual reality headsets or, as in the Star Trek: The Next Generation television series, through personalized rooms in which real people can interact with holograms. realistic.

Facebook, which is arguably the tech company with the greatest interest in the metaverse, describes it more simply: “The ‘metaverse’ is a collection of virtual spaces where you can create and explore with other people who aren’t. not in the same physical space as you.”

Current technology is not yet powerful enough to create realistic virtual worlds. While people can immerse themselves in digital environments through VR headsets, like Facebook’s Meta (formerly Oculus) family of devices, these environments are more like video games.

Some current video games, like Fortnite, have metaverse-like attributes: users can lead customizable digital characters who can chat with other players. But they still have to play Fortnite using conventional computing devices like PCs, smartphones, and game consoles.

What is Facebook’s vision of the metaverse?

According to Zuckerberg, the metaverse is the next evolution of social media. It’s about moving beyond static user profiles that allow people to simply post comments and photos. To access it, users will need to wear VR headsets or Augmented Reality glasses that will overlay the digital world on the physical world. Realistic holograms could also be projected into the real world by advanced projection systems.

Architects would be able to display digital plans of buildings in their physical offices. Friends could use the metaverse to attend concerts without having to be there.

People could use multiple digital avatars to represent themselves: a more serious avatar for work, a casual, cartoonish avatar for spending time with friends, and a whimsical avatar like a robot for playing video games.

New economic systems, based on cryptocurrencies and digital collectibles known as NFTs, would allow people to buy and sell goods and services.

The metaverse would also change the way people interact with smartphones or Augmented Reality glasses, Zuckerberg said. People would be able to use hand gestures to “say a few words or even just make things happen while they think about it.”

Meta: The final disconnect from reality?

Mark Zuckerberg hasn’t lost his mind, but he wants you to lose yours…in the metaverse. He’s investing billions of dollars to ensure that his renamed Meta company will be the industry leader, in the same way IBM dominated the IT industry for decades.

Other large technology companies are embarking on the adventure. Game software development companies, chip makers and hardware developers. Together, they will create a whole new industry that will run alongside artificial intelligence: artificial reality.

It will fulfill the dream of transhumanism of living forever as an AI program embodied in a personalized and stateless avatar. Ray Kurzweil, Director of engineering at Google and founder of Singularity University, is expected to dance in the streets as his father’s long-awaited digital resurrection is occurring.

The Metaverse will suck up every bit of data in your life to bolster what Dr Soshanna Zuboff calls “surveillance capitalism”. That is, every blink of your eyes, every facial expression, every facet of your emotional and physical states, etc. The metaverse will know a lot more about you than yourself.

When Mark Zuckerberg says “the future will be private,” he is lying. In fact, there will be no privacy. And you will not be remunerated either for having voluntarily given yourself up to this artificial utopia.

The Metaverse won’t necessarily tell you what to think, but it will completely change the way you think. It will rearrange your logic circuits in such a way that you will no longer be able to distinguish what is real from what is not. Your metaverse will become as real to you as the nose to your face.

Many people have already compared the metaverse to the movie Ready Player One. In it, a dystopian world of poverty and misery turns into an instant utopia just by putting on your Virtual Reality headset. This is reminiscent of the World Economic Forum’s statement that “You will not own anything and you will be happy.”

How is the metaverse going to transform the world’s economic system? Zuckerberg sees a mix of real and virtual savings. There will be interchangeable currencies. You could buy a pizza in the Metaverse and have it delivered to your home. Or vice versa. Of course, Zuckerberg also wants to create and control digital currency.

Facebook’s idea for the metaverse is far from being realized. It will take years, if not decades, for it to be fully realized – if it ever is.

To enable the metaverse, communication is essential. 5G wireless speeds will only scratch the surface. It is the 6G which will ignite the powders.

You can be absolutely certain of one thing: the societal debate on the metaverse has only just begun.