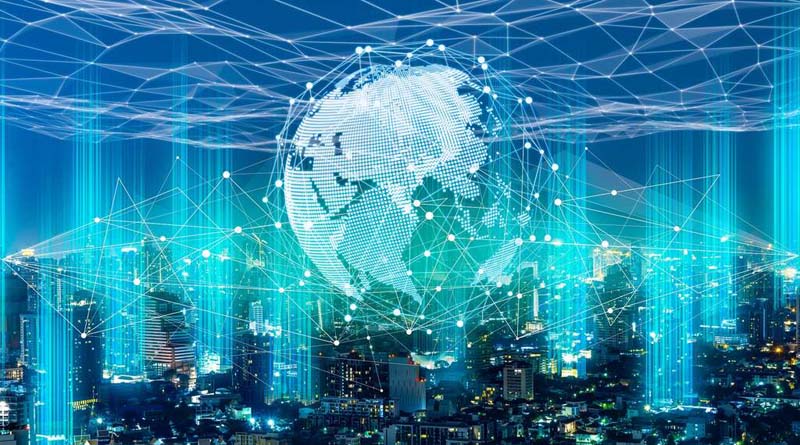 In 2019, the Internet blew out its thirty candles. It is an unprecedented great invention that the world has known. There is something to be in awe of when you see how the Internet has transformed the world. The web and its ramifications have extended throughout the sphere of our daily lives.

More and more machines communicate with each other. Progress is so rapid that even specialists can no longer keep up.

Data is the most prestigious resource of this new digital age. Thousands of devices are connected to each other and collect huge amounts of data.

Data has also become an invaluable resource and access to Big Data is leading to the development of new technologies.

Google, for example, depends on the data that its users often make available to it even without knowing it. The Internet is characterized by the monopoly situation that has established itself in recent years.

But who is really in control? Blockchain technology offers affected individuals the ability to control their own data. It is clear that men collaborate less and less with their peers, preferring to turn more and more to technology.

“Blockchain” was invented in 2008 by a man or a woman or a group of people under the name Satoshi Nakamoto. No one knows who is behind this name. The Blockchain or Distributed Ledger Technology (DLT) is a technology based on the consensus technique and intended to replace all trusted third parties. The Blockchain is a real community system. The database, distributed, shared and encrypted, serves as an irreversible and incorruptible public information repository.

Blockchain is likely to have many applications in all areas even if the financial and banking sector is privileged today. It therefore has a data or document conservation function; it is a platform allowing transactions, transmissions; it can be the support of smart contracts.

At the origin of creation, there is consumer mistrust in banks following the “subprime” crisis. The idea then sprouted to develop a system making it possible to do without banks and more generally all trusted third parties.

In addition, the first network in the world using Blockchain is “Bitcoin” created in 2009. It has been operating continuously since then. Bitcoin is a cryptocurrency that does not depend on a central bank. This virtual money is used as a means of payment in the form of “Tokens” and can be the object of transactions between users.

For now, it should be noted that only few people understand Blockchain technology.

In addition, the principle of the Blockchain is that each of the participants receives a copy of the data exchanged, which allows them to know which transaction has taken place.

Cryptocurrencies and Blockchain technology therefore constitute a counter-power in the face of “the excesses of governments and central banks”. Blockchain is a real community system.

1. Blockchain: a technology without a central body

In 2015, Blockchain received its respectability diploma from the very serious newspaper The Economist by being presented as “A Trust Machine”. This new technology makes it possible to exchange value without a trusted third party.

It is also a disruptive technology which aims to eliminate trusted third parties. These are the bodies authorized to implement electronic signatures to allow the exchange of goods, the exchange of information on the Internet. They can also be organizations ensuring the security of transactions of goods such as payments. Trusted third parties, for example, notaries, clearing houses, platforms such as Paypal, collaborative platforms, banks, insurers.

For its initiators, it is a question of limiting the power of existing institutions. We trust without meeting. Confidence is the ambition of promoters which must be based solely on technology. The technology has thus been referred to as the evocative name of the trust machine.

All the applications envisaged by Blockchain aim in reality to challenge the institutions in place, whoever they are, including judges.

These technological developments and the new avenues they open up in terms of transactions would constitute above all a response to the mistrust that targets trusted third parties in general and states in particular, which are the sources of modern law.

Whether on the Internet or even in other social structures, intermediaries undermine real democratic power because they are the private operators who determine our relations with one another. They have absolute control over the data and information exchanged between network users.

It is therefore in all of our interests to eliminate these intermediaries or at least to limit their influence as soon as a better technology exists such as Blockchain.

In addition, transactions on the Bitcoin network are verified and validated by the network agents themselves and this makes centralized intermediaries such as banks redundant.

Also, several transactions as well as the signing of a contract or a monetary transfer are grouped together in a block and recorded in a virtual register. A complex cryptographic process made up of algorithms links these blocks to each other. The particularity is that the whole chain is recorded on all the computers of the participants in the network and not only on a central instance such as the server of a bank.

All data is accessible in a decentralized manner. With Blockchain, almost everything that happens in our lives can be considered a transaction (a wedding, sending a package, paying for a train ticket etc.). These events in the form of a transaction can be managed and recorded on a Blockchain. The principle of Blockchain prevents manipulation post.

On a Blockchain network, transactions can be automated with a program called “smart contract”. It checks that certain conditions are met and proceeds directly to the transaction.

In addition, Blockchain is antithetical to the state. Indeed, it destabilizes the foundations of its authority, in that the rule of consensus replaces the idea of ​​a centralized decision at the time of the formation of each of its blocks at the last stage of mining.

Last but not least, Blockchain is disrupting the way in which trust is generated: traditionally backed by institutions since the appearance of fiat currencies, it is emancipated from them thanks to technical reliability – asymmetric cryptography and distributed IT architectures – and to the psychological consequences engendered. through technology – it can be changed by will.

2. A transparent technology, secure and safe from trusted third parties according to users

In 2008, Blockchain was born in a context which is not trivial: that of the greatest financial crisis that the world has known since 1929, a crisis arousing mistrust of the usual trusted third parties such as states or banks.

Blockchain can therefore be defined as “a technology for storing and transmitting information, transparent, secure, and operating without a central control body”.

It is indeed now possible to obtain a level of confidence at least as strong only with this technology.

In this context, competitors of official-state law such as Blockchains can thrive, offering full transparency and disintermediation that eliminates reliance on trusted third parties. The power now lies with users and consumers, who benefit from streamlined processes and high quality of information provided. This is favorable to the stability and security of transactions.

Usually, trust is the belief or faith in the reliability of a person or a system. This confidence has hitherto been based on the combination of technology, organization and law. With Blockchains, we rely entirely on technology. This is how “Smart Contracts” allow two partners to enter into a commercial relationship without knowing each other and without the supervision of a central authority. The system itself guarantees the validity and honesty of the transaction. Trust no longer depends on people but on machines – “The Trust Machine”, as The Economist headlined about Blockchains.

The current crisis of confidence is particularly affecting the banking sector and it is hardly surprising that Bitcoin and ether, which are cryptocurrencies based on Blockchain technology, are giving rise to true monetary systems that are independent and parallel to the systems. state monetary and banking.

It is up to trusted third parties in the collaborative economy that can be affected by Blockchain applications (Uber, Airbnb, eBay, Paypal, etc.). So Blockchains could upset the very nature of the organization of current societies, which Uber and its ilk have not done – which ultimately contented themselves with replacing capitalist predators with other capitalist predators.

Each also has a mega-identity which it owns. There is no longer any need to entrust your data to third parties. One of the flagship promises of Blockchain technology is to replace trusted third parties and ensure the finer and above all automatic execution of certain contracts that interest the world of creators, for example. Blockchain can be a tool that publishers or collecting rights societies will use, but it can also become a tool that replaces these trusted third parties to some extent.

Blockchains are secured by various mechanisms, including advanced cryptographic technologies and mathematical models of behavior and decision-making. Blockchain technology is the basic structure of most cryptocurrency systems and prevents this type of digital currency from being duplicated or destroyed.

Blockchains rely heavily on cryptography to keep their data safe. An extremely important cryptographic function in such a context is that of hashing. Hashing is a process by which an algorithm called a hash function receives data input (of any size) and returns a determined output containing a fixed-length value.

The security of the transaction is ensured by a network of computers which validate and certify the transaction before registering it definitively in a block. Once registered, the latter becomes tamper-proof and transparent, easily verifiable. It is therefore a distributed network within which transactions are carried out peer to peer. Blockchain technology enables the security, capitalization, traceability and measurement of exchanges between peers.

Transparency also extends over time because all information is stored without time limit on Blockchain. It is therefore possible to know the origin of a payment for example, but also to know the previous payments.

This transparency coupled with ease of access (an Internet connection is sufficient) allows a complete view of the transactions carried out on a Blockchain and the data or information that can be placed there. Blockchain would thus make it possible to improve the provision of services due to the automation, immutability (of the blocks of data making up the Blockchain) and near-real-time reports authorized by smart contracts , in particular in the fields where proof of identification is required. Finally, if the technology were to replace certain trusted third parties, it would be important that it could be controlled. Moreover, it is difficult to imagine that all the technology is in the hands of a few computer giants. Also, the main difficulty presented by Blockchain is its lack of regulation and therefore of legal value and enforceability against third parties.