No question about it: the future of work is changing. No longer do we join a company fresh out of high school or college, spend the next thirty or forty years traveling to work where we’ll put in our traditional forty-hour workweek, and then retire with a gold watch and fat pension.

Now, we’re far more likely to have multiple employers over the course of a single career. And an increasing number of us are joining the gig economy, meaning that we answer to no one but our clients and our own bottom line.

What is the Digital Economy?

Nowadays, that pretty much means them all. So potent is the rise of the digital economy, in fact, that it’s changing business models and practices across even the oldest and most traditional of sectors, from banking to manufacturing.

A Question of Security

One of the most exciting aspects of the advent of the digital economy is that it’s creating entirely new industries. These include some of the most stable, in-demand, and high paying jobs in the world today.

Case in point: Cyber-security. As companies big and small, old and new, mom and pop and multinational, increasingly digitize their operations, they’re needing the best cyber-security the industry has to offer. After all, as hackers grow more sophisticated and cyber-attacks grow more prolific and pernicious, cyber-security isn’t just a discretionary budget item anymore. It’s a necessity.

The digital economy is doing even more than just creating new industries, however. It’s also making existing ones more efficient and productive. That’s especially true in business-to-business enterprises. Thanks to the ever-expanding Internet of Things (IoT) and the implementation of the 5G network across the US, businesses, and stakeholders are better able than ever before to connect, communicate, and collaborate, no matter where their partners might be or what they might need.

And that may well mean that the digital economy is the best tool you’re going to find to optimize your supply chain or build outstanding relationships with your vendors, clients, and customers.

The Role of AI

Artificial intelligence (AI) is a key driver in the digital economy. Through automation and machine learning, processes are streamlined, productivity increases exponentially, and geographic boundaries dissolve.

Automation enables the collection and nearly instantaneous analysis of previously unfathomable quantities of data. Business leaders, stakeholders, and decision-makers come to their work armed with business intelligence of scope and accuracy never before seen.

And that power is revolutionizing industries. No matter whether you’re growing tomatoes or building microprocessors, the new technology is making business practices better, bolder, and more efficient than ever before.

Business models and processes are based on evidence-based best practices. From patient treatment plans in the healthcare industry to safety improvements implemented in the automatic manufacturing industry are based not on speculation but on information derived from millions, if not billions, of digital data sets. Even so, AI still comes with its share of concerns. In marketing, AI offers some unique ethical issues, such as bias and prejudice reinforcement. Because AI’s learning engines are still created by humans, the biases of those humans, whether explicit or implicit, can influence the function of the AI. It can also lead to the creation of fake and prejudicial media, which in turn leads to legal and legislative issues.

As exciting as the advent of the digital economy may be, though, it’s certainly not without its challenges. The digital economy is, after all, an intrinsically globalized one and that means that, by definition, it transcends borders.

While this dramatically expands the reach of entrepreneurs, enterprises, and the people they serve worldwide, it also raises a host of regulatory questions and potential legal issues. Among the most significant of these, perhaps, are taxation issues.

Entrepreneurs who truly want to thrive in the digital economy have to be particularly careful about how domestic and international tax laws might apply in the areas where they operate. This is true even if your business operations are only virtual ones. Failure to take these into account can lead to lots of headaches down the road, from tax penalties and fines to, in the worst-case scenarios, imprisonment.

So while you’re exploring the wondrous opportunities of the digital economy, it’s also vital to know your obligations and to meet them on time, every time.

The digital economy is changing the world of work as we know it. Thanks to digitization, new industries are being created and existing ones are being enhanced. Above all, the digital economy is giving new freedom and opportunity to the ambitious and innovative entrepreneur. In a rapidly evolving economy, the key to success is having the courage to evolve right along with it! 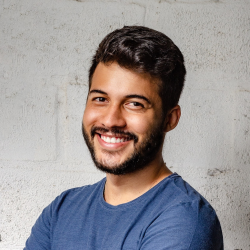 Luke Smith
Luke Smith is a writer and researcher turned blogger. Since finishing college he is trying his hand at being a freelance writer. He enjoys writing on a variety of topics but technology and digital marketing topics are his favorite. When he isn't writing you can find him traveling, hiking, or gaming.

Luke Smith is a writer and researcher turned blogger. Since finishing college he is trying his hand at being a freelance writer. He enjoys writing on a variety of topics but technology and digital marketing topics are his favorite. When he isn't writing you can find him traveling, hiking, or gaming.