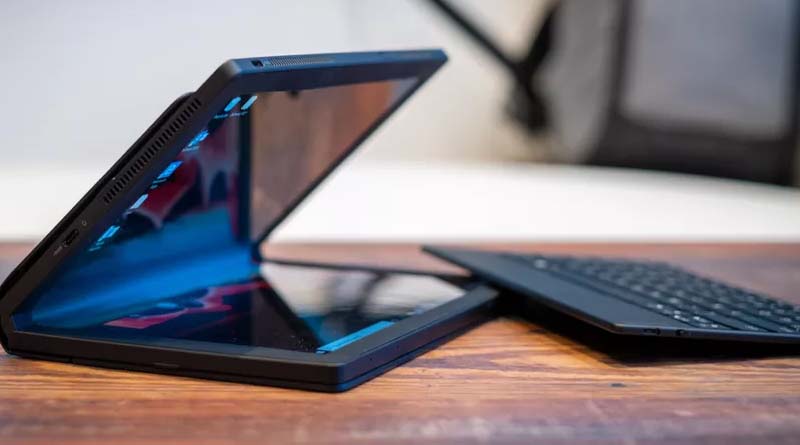 Two prototypes of foldable PCs appeared at the electronics show in Las Vegas. But with many manufacturers, the atmosphere is on hold, while the technologies related to folding screens are not yet ripe.

One of the notable events of the technological year 2019 was the appearance of foldable smartphones. Could it be that 2020 is the year of computers with foldable screens? At the Consumer Electronics Show (CES), the electronics fair in Las Vegas which was held from January 7 to 10, we were able to take charge of two laptop models of this type, unveiled by Dell and Lenovo, both equipped a screen that folds in half. Only one of them will be marketed, the X1 Fold. Dell’s model is just a prototype.

Their format is quite similar: about 13 inches when flat, which corresponds to the size of a travel laptop, and about 8 inches when folded, the size of a small tablet. Unlike a classic portable PC, once folded, you can store them in a small handbag.

We were able to take them in hand, and apart from this asset of compactness, their usefulness did not jump out at us. When you want to use them like a large tablet, they seem too heavy to be wedged in hand for a long time. When you fold them in half to type a text, you realize that their keyboard is particularly narrow, and uncomfortable like that of Netbooks of yesteryear. When we fold them completely in the hope of transforming them into a compact tablet, we realize that their screen is inaccessible, since it folds inwards in order to shelter from shocks.

A promising prototype at Intel

If, for the year 2020, these foldable PCs are unlikely to be a revelation, optimism is not prohibited on a more distant horizon. This is what suggests a third foldable PC unveiled in Las Vegas, the prototype of Intel Horseshoe Bend. The manufacturer imagined a computer very different from the Dell Ori and the Lenovo X1 Fold: it is much larger.

When unfolded, its 17.3-inch screen is halfway between that of a travel laptop and that of a desktop PC. Its surface is huge and it has a foot that allows it to be placed vertically. It comes with a detachable, medium-sized wireless keyboard that you can place in front of your screen to type fairly comfortably. When there is room to spread out, this portable PC therefore offers completely new comfort.

On the train, you can fold your screen in half to give it the shape of a classic mobile PC, and place your keyboard on the lower part of your screen to work. We then have a perfectly usable laptop with a 12.5-inch screen, just enough to work properly. Once fully folded, the Horseshoe Bend is easy to pack in luggage, its thickness approaching that of two stacked iPads.

This prototype of PC moving from great nomadism to great comfort has the potential to seduce and improve the digital everyday life of many users. But Intel is not a computer manufacturer: by imagining this concept, its intention is to inspire other manufacturers, and especially to test the electronic components which will be at the heart of possible future foldable PCs, to ensure that they will be efficient enough to adapt to it.

Will foldable be a trend?

Will manufacturers follow the path designed by Intel? A temperature measurement in the CES bays rather indicates a certain chilliness with regard to flexible screens. Out of the ten major PC manufacturers present, only Lenovo and Dell presented such PCs.

This wait-and-see attitude echoes that of smartphone manufacturers, who are very rare in promoting their foldable models in Las Vegas. Huawei has contented itself with staging its foldable Mate X, released in China at the end of 2019. Samsung was only showing its Galaxy Fold, and not its clamshell smartphone expected for the coming months.

As for the smartphone manufacturer Motorola, which also has to market a foldable flap smartphone soon (the Razr), it had no stand at the show. It was necessary to inquire with Lenovo, the parent company of Motorola, to learn that a demonstration was possible in the back of the stand, out of sight. The interest of this smartphone did not jump out at us. Large in pocket, a little slow to wake up, it is equipped with a screen not much larger than that of a lambda smartphone.

Technology not yet ripe

If the manufacturers of PCs and smartphones are being wait-and-see, it is because many still consider the technology of flexible screens insufficiently accomplished. “We are still looking for the best solutions,” said a spokesman for the Chinese manufacturer TCL, which presents two prototypes of foldable smartphones on the CES.

Their spokesperson did not commit to a marketing date: “Among the dozen prototypes that we have in the laboratory, and which are very unlike, which is the most relevant format? What is the best way to protect the screen? How to organize the menus of a foldable mobile? We do not yet have the feeling that we have all the answers to these questions. “

At Dell, we were also showing signs of hesitation: “When we embark on a prototype, it is because we are rather confident about the value of the innovations it brings. So yes, at one time or another, it is very likely that we will release a foldable laptop, in one format or another. Not necessarily that of our prototype elsewhere, ” said a spokesperson. And probably not in 2020.

The solidity in question

At Dell, at TCL, and even at Royole, a large subcontractor of flexible screens, the question often leads to a small moment of uncertainty: is the flexible OLED technology sufficiently solid? Many keep in mind the disappointment of Samsung in April 2019, forced to cancel the release of its foldable smartphone following the breakdowns noted by the press.

All eyes are mainly on the foldable glass, which could cover the plastic screens of folding smartphones and PCs to protect them from scratches and bumps. We visited Corning, the most famous manufacturer of glass for smartphones. His spokesperson points out the difficulties of developing foldable glass:

“When you decrease the thickness of the glass, it becomes surprisingly flexible. This is the reason why we can bend the optical fibers, which are made of glass. But when the glass is under tension, when it is folded for example, its edges become very fragile. In the case of smartphones, it will therefore be necessary to find solutions to protect the sides of the screen, especially at the hinge, and arrange for the bottom of the screen to be perfectly smooth. When will we get there? I can’t tell you, it can take a year, two years, five years… ”

A vision shared by most of the players, who have been working on flexible screens for years: they will probably need many more before this technology matures.