Since the closure of Toys R Us and Sport Chalet, many have started to claim that brick and mortar chains are going to experience a retail apocalypse real soon. However, this is quite far from the truth. In fact, the retail chains are in the process of adopting new methods to bring a drastic change in buyer behaviour and customer demands.

Today, more and more brands are looking for innovative ways to promote direct engagement of the customers with their products like harvard style referencing generator. The sharpest minds of the retail industry are working hard to combine technologies such as AI, CRM and augmented reality and most importantly, facial recognition software into their system to create retail stores of the future.

Facial recognition epidemic: A technology that will soon revolutionize the retail market

It is no secret that customers are being watched as they shop in retail stores. Be it the neighbourhood supermarket, a big-box retailer like Target or a luxury boutique like Chanel, nowadays every store has overhead cameras that track buyer’s activities. At first, an increasing number of stores had turned to facial recognition technology primarily to identify shoplifters.

Facial-recognition has already been introduced in personal devices like SmartPhones and tablets (like iPhone X).  Counterpoint research also predicts that within 2020, more than 1billion Smartphones will include facial recognition features in their software. This has accelerated a mass adaptation of the technology, which can very soon entirely change the global shopping pattern.

Today it has become pointless to report shoplifting to the police. The policing budgets in England have been cut by about 20% since 2010. Also, a change in the law in 2014 made shoplifting of goods below a value of £200 a summary offence (i.e. a less serious offence that’s not tried by a jury). Since then, the number of people being arrested for shoplifting has fallen dramatically, and only 10% of it is reported to the police. With an estimate of over 700 million dollars annual loss to theft, retailers have been looking for other methods to curb the loss for a long time. And the improvements in AI technologies have made facial recognition the most viable option.

Also, with facial recognition, stores are able to share the data across the globe. Meaning, if one store considers a person as a threat, every other business in that network will come to the same conclusion and blacklist the person. While that’s good news for the shopkeepers, this raises pertinent concerns about potential overreach. Privacy advocates fear that facial recognition straddles the line between being a force for good and being a violation of personal privacy.

According to Neema Singh Guliani, the American Civil Liberties Union’s senior legislative counsel, “Unless we really rein in this technology, there’s a risk that what we enjoy every day — the ability to walk around anonymous, without fearing that you’re being tracked and identified — could be a thing of the past,”

Josh Davis, who works on facial recognition in human and AI, says, “The systems are getting better year by year”. The ability of the algorithms to match a new image to a face has improved 20 fold within 2014 – 2019. And with computer processing power doubling each year, the cost falls every year as well.

Though each algorithm is different, fundamentally, each of them works in the same way. Primarily they are given a large number of images and told that which one of them are the same people. Then they use textures, gradients of light and dark to detect specific points of the face to build a 3D image. Many a time passport control machines fail to recognize you if you suddenly gain a lot of weight or grow a beard as a significant part of the textures become different.  But in today’s facial recognition tools, the algorithms understand these textures at an extremely high level.

However, the specific details they use to identify people are still not known till date. It’s like a black box; the data is incorporated into the algorithm, sloshed around a bit to eventually generate the results (and it’s almost next to impossible to trace its path).

Though facial recognition is mostly known for its security aspects, the technology has immense potential to revolutionize the very way shops operate their business today. Not only will it help to improve staff management or increase customer satisfaction, but the integrated facial recognition technology has the potential to provide the retailers with a greater insight into the mysterious minds of the consumers.

Precisely, the technology enables the brick and mortar stores to do what their online counterparts have been doing for years; identify frequent buyers, link them to past purchases and generate customized product recommendations based on those specific data. Research also suggests that facial recognition will also connect the offline and online activity to create a smarter shopping experience for customers and businesses alike.

Here are some of the ways in which this biometric software aids the retail business:

Face recognition helps retailers prevent organized retail crime. The system of this software instantly alerts the security guards the moment someone who matches the ‘documented retail criminal record’ enters a store. It’s been observed that retailers reduce losses by up to 34% as a result of face recognition. Facial recognition has reduced acts of in-store violence by up to 91% (by identifying dishonest customers even before committing crimes).

Face recognition technology helps in improving customer experience by instantly recognizing loyalty customers. It maps the facial expressions of the customers to identify emotions such as joy, anger, surprise, fear or sadness and tailors the product accordingly. Retailers can also send customized text messages to their target customers to offer discounts, recommendations, and other benefits suited to their needs.

For example, CaliBurger, a California based eatery, has already linked facial recognition in its loyalty program. The loyalty members have also readily agreed to share their personal data with the brand. The software, installed in ordering kiosks, instantly recognizes registered members as they approach the counter. This activates their loyalty accounts immediately, and their favourite meals are suggested on display, based on their previous purchases.

Facial recognition helps retailers assess the demographic information (age/ gender and others) of its shoppers at each stage of the customer’s journey. The interaction of the shoppers with the store is tracked and evaluated at every step, starting from browsing through the products to checkout. Thus, it helps retailers optimize and plan their product offerings.

Facial recognition software collects data like the areas of the store the shopper lingers, what mood the shopper’s expression conveys to how long it takes to choose a particular cereal. Tracking the activity of people around a store, including where they stop and where they don’t, businesses can adjust the layout or reposition stock accordingly.

Tracking online shopping helps retailers build extensive consumer profiles. All it demands is analyzing the shopper’s online activity sessions (the advanced algorithms already track their “most viewed” and “wishlisted” products to predict their upcoming buying activity). But how does that digital behaviour transforms into a physical store? Facial-recognition software provides a direct answer to that. It enables merchants to connect the online with the offline behaviours of the consumers and thereby structure boundary-free shopping navigation.

For example, let’s say a shopper who has been buying groceries online for the past few months. The person decides to visit the store this time. By tracking the online order history of the shopper, the in-store facial-recognition cameras will quickly generate the order for groceries on display as soon as he/ she approaches the counter.

But are the consumers ready for their faces to be used for commercial purposes? Well, as per observation, most of them are.

Samsung and AT&T also use facial recognition for aggregating store-traffic patterns, demographics and other data. In a candy-store mock-up, Intel has showcased that their software camera can recognize the shoppers instantly and send their names, past purchases and recommendations for candies to the store associates. Hence, they can recommend the buyer.

However, while the practical applications of facial recognition seem reasonable, privacy advocates are extremely concerned about its risks. The worldwide use of facial recognition technologies is directly violating data protection standards. This raises some pertinent questions, like do this technological feat genuinely threaten our freedom? And with it, our anonymity?

Microsoft’s president Bradford L. Smith has expressed his concerns regarding face recognition saying, “We live in a nation of laws, and the government needs to play an important role in regulating this technology,” Privacy and civil rights concerns have escalated in San Francisco and on May 6th, 2019 a law was passed to ban the use of this technology. This can be considered as the first ban of its kind that has been imposed on the use of face recognition.

As per a report by Boston Globe, the Somerville City Council (Massachusetts) banned the use of facial recognition, making the city the second community to take this a decision.

Oakland, also took the same decision on July 16th and became the third country to ban the use of this technology.  Since then, there has been an ongoing debate on privacy, consent and function creep (data collected for one purpose being used for another) all over the globe.

And the debate is only getting louder with every passing day.

Facial recognition surely promises convenience but not without concerns. With digital devices already putting facial recognition into the direct power of people, the technology is poised to spread dramatically. It will enable the brick and mortar stores to do what their online counterparts have been doing for years; identify frequent buyers, link them to past purchases and generate customized product recommendations based on those specific data.  But we must also keep in mind that quite soon it will usher in an era of BigBrother monitoring our each and every move or companies secretly tracing us without our consent.

Notwithstanding all the exciting and innovative ways the retailers can use this technology, (and regardless of how good their intention maybe) it’s still an unchartered territory, along with serious potential pitfalls that we all need to be wary of. 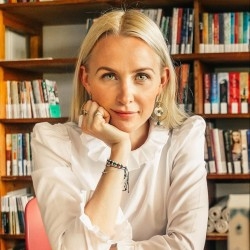 Ammie Jackson
Assistant Professor at School Of Computer Science, MyAssignmenthelp
Ammie Jackson is an Assistant Professor of the School Of Computer Science in Ottawa. She has completed her research on Network Security and frequently writes online blogs and journals. Herpassion for teaching has compelled her to get associated with MyAssignmenthelp.com, which guides students with their critical coursework and assignments. To know more about developments in the technological field, you can seek assignment help from her directly through the website.

Ammie Jackson is an Assistant Professor of the School Of Computer Science in Ottawa. She has completed her research on Network Security and frequently writes online blogs and journals. Her passion for teaching has compelled her to get associated with MyAssignmenthelp.com, which guides students with their critical coursework and assignments. To know more about developments in the technological field, you can seek assignment help from her directly through the website.