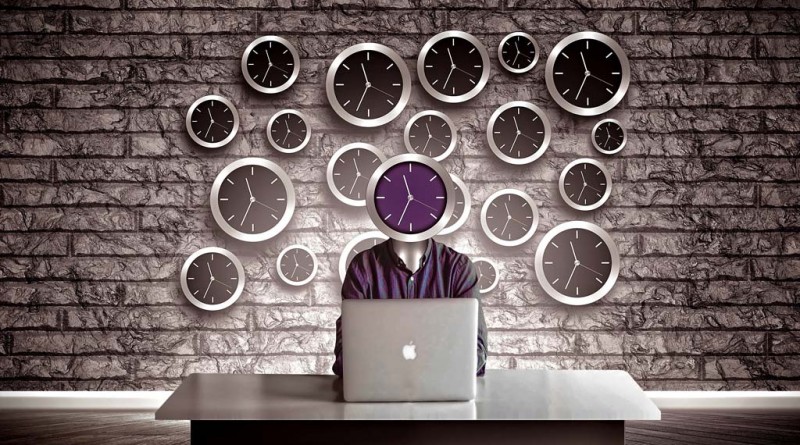 Transportation planners around the world are making efforts to fight with congestion and to improve traveller experience in all metropolitan areas. Before planning the improvements, the very first job is to understand the spots where make travellers confused.

In this article, we are going to introduce three interesting projects to measure people’s in three different modes of travel: Public transit, road driving and air travel. 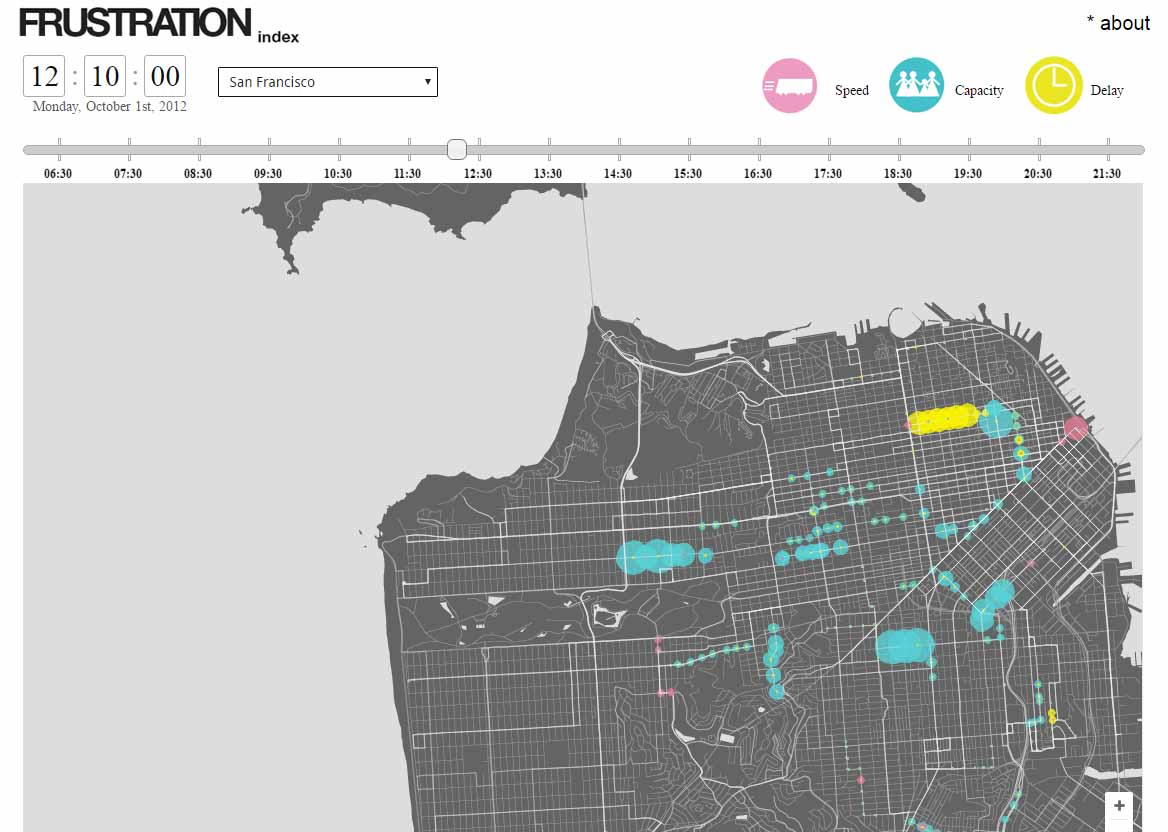 “If one were to somehow take a mental-health reading of commuters at 6:30 p.m. on a Monday, it would look something like this ‘Frustration Index.’” (CityLab)

This index is to measure and visualize levels of satisfaction for the mass transit system in  San Francisco, Geneva and Zurich. The index is calculated based on three parameters: capacity, delay and speed, and the ridership information was from one example data in October 2012. The index was said to be a “way to compare happiness across the three cities,” by the programmers.

The developed index was showed as a map-based data visualization application. By using the slide bar on top of the website, you will be able to discover different satisfaction levels in different time of the day and also to explore at a given time, the service levels in different places around the city. The website displays “the ridership’s presumed state of mind as amusing weather icons. ‘Excellent’ service prompts a sunny sky, while ‘worst-quality’ situations get a lightning-throwing thundercloud.”

The index was explained in more detailed in their website. 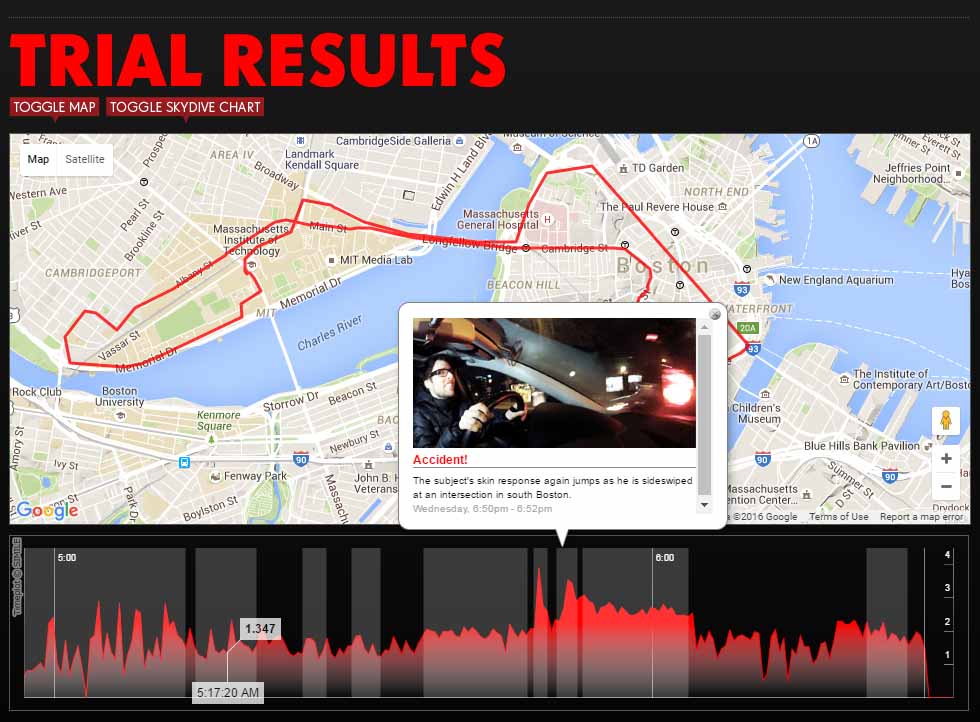 “According to the Bureau of Labor Statistics Time Use Survey, Americans spend on average 51 minutes a day behind the wheel. So improving the stress and strain of that daily drive could also have health impacts.” (Fast Company)

“To investigate the emotive aspects of driving, Audi and the Senseable City Lab are working together to develop the Road Frustration Index, a project that combines realtime data on traffic, incidents, weather and driver sentiment across 30 metropolitan areas in the US to approximate the level of road-induced stress in each locale.” (MIT)

In MIT’s website, user “can follow each of his stress-inducing incidents along a chart of the drive that pairs measured anxiety levels—using skin conductance measurement, one of the components of a polygraph test—with the time they happened, a photo, and the location plotted on a map. It’s all captured with the thoroughness of a scene in a Hollywood movie, or to be more exact, a car commercial. That makes sense.” (Fast Company)

The index is shared through a series of ranking table in Bloomberg’s website.

“The joys of the airport: Late or cancelled flights, long lines, crowded terminals, overpriced, appalling food. Bloomberg Businessweek surveyed more than 3,000 frequent flyers, analyzed travel times to and from airports, and compiled on-time departure and arrival data to find the most—and least—irritating places to catch a plane in the U.S. and Canada.”

“Each airport received a frustration score of 1–100 based on the time it takes to get there; how easy it is to clear security; the quality of terminals and restrooms; amenities; and how often flights take off on schedule.”

The overall ranking from the most to the least frustrating ranking is showed below. 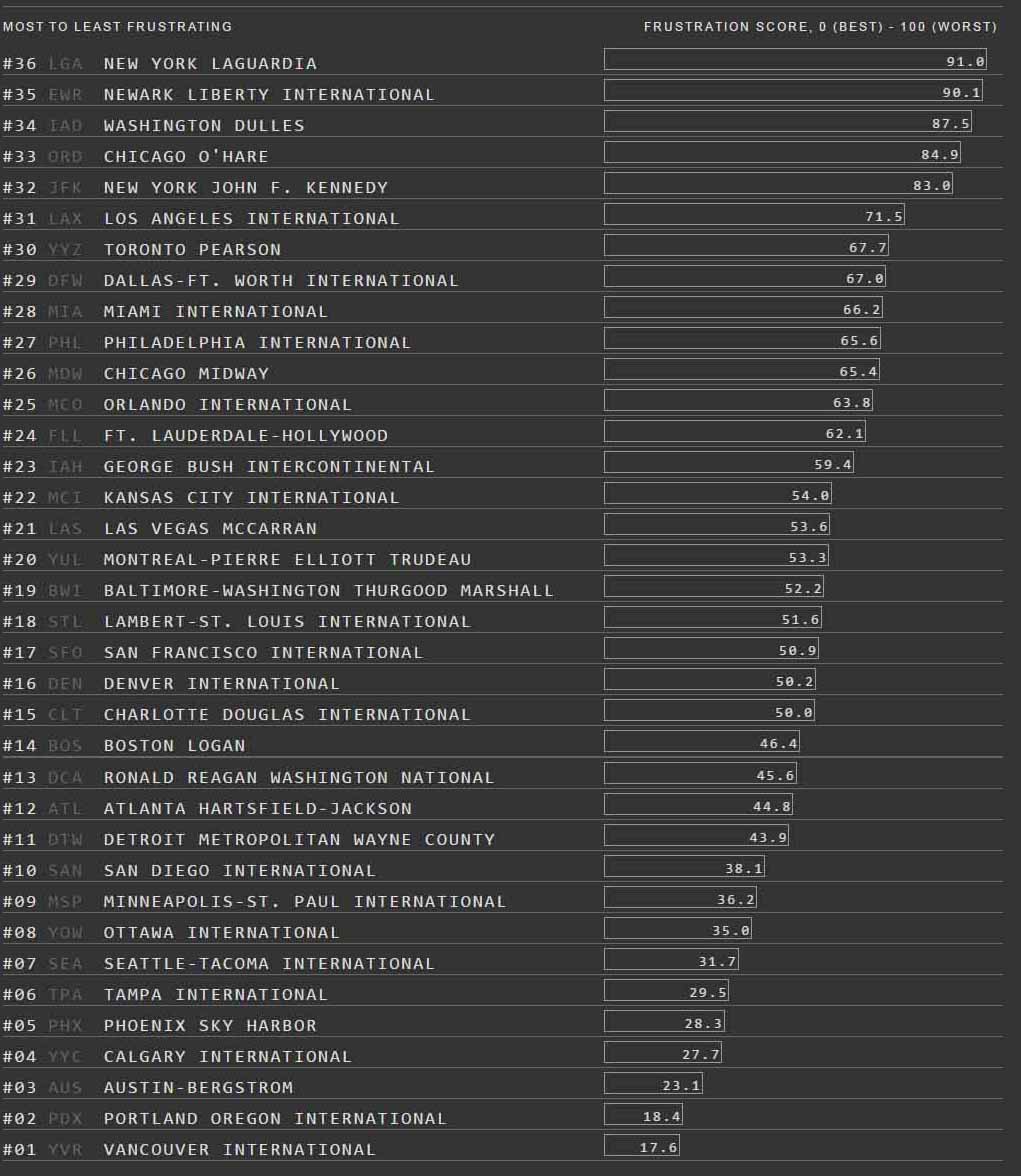 The application also shows the ranking for: